All About FIV - Feline Immunodeficiency Virus

FIV is a slow-acting virus. It's a cat's version of HIV that results in AIDS for humans. People cannot catch FIV, so don't worry!

Many times FIV is not detected until the cat has become quite sick. The virus reproduces inside white blood cells (the ones that fight infection) and spreads throughout the lymphatic system. Swollen lymph nodes and fever is the initial result. Over time, the immune system becomes increasingly weakened and the cat loses it's ability to fight even the simplest of infections. Healthy cats can fight off the normal bacteria, viruses, protozoa, and fungi of their environment but FIV cats become severely ill or can die from such infections.

The most common means of transmission is through bites. Free-roaming and feral males who are aggressive (they bite and get bit) are at highest risk for getting and passing on FIV. A less common way of transmission is from pregnant mother to newborn/nursing babies.

Signs and Symptoms of FIV: 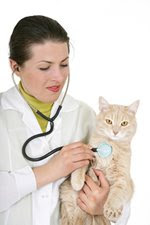 To diagnose FIV, the vet simply takes some blood to be tested in the office or a lab for the presence of a certain antibody. If the result comes up positive, then a second test (different method) will be ordered to make sure the first one wasn't a false-positive.

Protecting Your Cat from FIV:

Taking Care of an FIV Cat:


The lifespan of an FIV cat depends upon how soon the disease is caught and the nature of the cat's infections. Some cats can live many more years under ideal conditions.

After the passing of an FIV cat, the home needs to be cleaned up before a new kitty can join the family. It's not the FIV you will be cleaning up. It's the various germs that your HIV left behind during it's final months of poor health. Disinfect all kitty supplies by washing thoroughly with hot soapy water and drip drying. Give these items a second wiping down with bleach water and air drying. Throw away soft toys and get new ones. Spray cat towers and beds with a disinfectant spray. Give all floors a very thorough vacuuming or mopping.