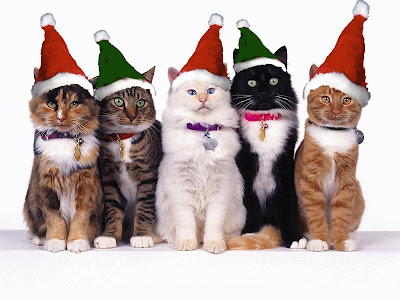 Cats and Christmas don't mix! It's a disaster waiting to happen! I have come to the conclusion that kitties are either not Christian or they disapprove of the pagan decorating that I do.

My first cat, Elise, was okay with all the decorating. Perhaps she was the exception. She'd walk around, give everything a sniff, and sit under the tree as if she were a present herself. Perhaps this high opinon of herself is why she allowed the decorating.

My second cat, Heimie, was born in the late summer so I knew I'd have issues of friskiness when it came to the Christmas tree. As a precaution I only put ornaments above knee level which worked great. I've seen photos of cats hanging out deep in the branches. I was okay with that - until Heimie decided to walk way out on the end of the limbs. The tree came crashing down twice! The following Christmas Heimie didn't climb the tree. Instead he continued his hobby of bow crunching. He could smell it when I got the bows out - he'd come running and pick out a bow to play with. For those of you old enough to remember IBM punch cards, that's what my bows looked like after Heimie got done with them! Gifts to be shipped out had to be wrapped and boxed up immediately. I had to remember to keep the lid on my huge bow box or Heimie'd get into it and crunch away. Heimie was a bow cruncher for 16 of his 17 years.

Ashley also liked to hang out under the tree and was okay except for one thing... on the years that it was way too cold and Christmas trees were freeze damaged, we used a fake tree. Ashley loved to chew on the ends of the branches and later cough up the little pieces of fake needles. So gross!

Pepper and Blue, sisters, are quite the handful. My sister says it's because they are tabbies. Blue eats/barfs/digests/poops ribbons and strings. During their first Christmas, Blue was running around the house like crazy, scooting on her bum. I thought maybe a little messie was stuck to her rear so I picked her up, ready to wipe, and there was a 2 inch piece of red curing ribbon sticking out. A mommy's gotta do, what a mommy's gotta do - I carefully pulled out about a foot of ribbon! Blue is a disaster (and trip to the emergeny room) waiting to happen! Because Pepper and Blue both chew ribbons and strings - all friends and relatives have been told "no ribbons or strings" on our gifts. These sisters also chew wires. We've had to replace phones, headphones, alarm clocks, Nintendo rechargers and computer wires. I don't dare put lights up on the tree. Do you remember the scene when the white cat chews on wires in National Lampoon's "Christmas Vacation?" I do not want to relive that scene!!

PeeWee is especially attracted to noisy things and will whack at them for half an hour. (try listening to the toilet handle wiggle at 3 am!) He also loves to knock things off countertops, dressers and the mantle for the sport of it.

So no tree or tabletop decorations for us. At least we have the front porch and front yard to decorate!

Send me your stories!

The first year we had the cat we also had a puppy and a ten month old baby. I'm not sure who caused more damage. The puppy thought it was a drinking dish, so did the cat, and the baby thought it was a new toy. The puppy chased the cat up the tree but since we had lost one tree this way years before I was prepared and had secured the tree with wires attached to the wall. Of course no one made a mess as well as my son who when he was two took as many of the glass ornaments as he could carry and brought them into my bedroom. The bedroom opened into the bathroom. He sat on my bed and threw each ornament one at a time onto the tile floor yelling with glee as they smashed and made pretty colors all over the floor. I was horrified of course.

Jen wins the trophy for being first! She's got it bad times three!

Great Post! Last year my full grown adult cat knocked down my tree 3 times trying to climb it. Ugh!
This year I am using a tiny 30 inch tree which he has totally ignored.
I didn't want him to finish off my ornaments this year, maybe next year we can try again.
~K

I got brave this year, but in baby steps and put up an 18 inch fake tree on my mantle.