When the two groups met, there were five cupids flying through the air. Next thing ya know, there were five couples walking away in separate directions. The couples began talking and soon found that they had amazing things in common. 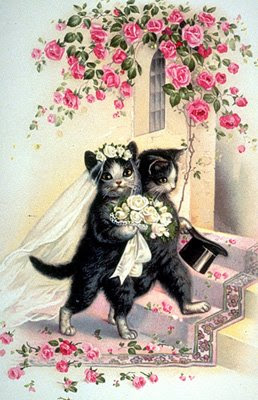 The next Spring, kittens are everywhere!
Can you figure out who the couples were, what treats they liked, what their favorite activity was and how many kittens each couple had in their litter?

Here are your hints-

Dobie (who had three kittens) liked to chase the laser light but not mice.

Sally loved to chase mice but not string.

Batman didn't have a thing for Sally nor did he have seven kittens.

Billy, who thought of himself as very big & tough, had the most kittens & wasn't about to chase some stupid string around - what a waste of time!

Pepper & Punkin didn't have one kitten but they did like tuna fish.

I LOVE these puzzles. Let me see if I can do it!!!