Are all calicos female? Are males calicos worth millions of dollars? So say the urban myths. I will try to explain these cats without going into genetics too deeply and giving myself (and possibly you) an aneurism, stroke or too much brain damage!

Everyone has DNA. Half came from mom and half came from dad, passing down their own genetic information to their children. DNA is made up of individual units called chromosomes. These chomosomes describe how the child will look - size, color, shape, all kinds of stuff.

The chromosomes for gender (sex) are named X and Y. Everyone has two of these, one came from from mom and one, from dad.

Females are XX and males are XY. Mom (XX) gives one X to every child. She does not have any Y's to dole out. Dad (XY) either gives an X to make a daughter or a Y to make a son.

Chromosomes are made up of genes. Genes hold the characteristics mentioned above. The genes for colors of cat fur (except white) are on the X chromosome. The white color gene does not live on a gender chromosome.

Now I will start oversimplifying because I don't want anyone to fall out of their chair with an intense headache:

The genes for the colors black/gray and brown/orange/red live on the X chromosome only. They do not live on the Y one. A female cat has 2 X's so she can therefore inherit a gene for black on of her X's and for brown on her other X. She can receive both colors. However, a male only has one X and can therefore only inherit one color (either black or brown, but not both).

Since the color white does not exist on the X and Y gender chromosomes, all cats can inherit white.

Let's say a female cat inherits white from one of her parents. She also inherits black on one of her X's and brown on the other X. She has all 3 colors going and can be a calico. Woo-hoo! 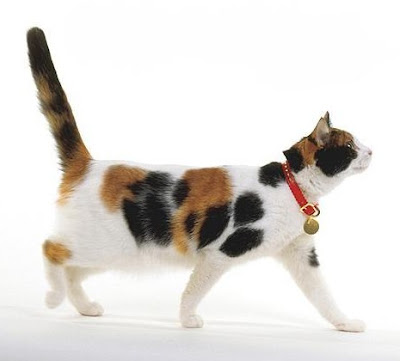 It's a bit trickier for a male cat. Let's say he inherits white from one of his parents. Since he's a boy, he only receives one X (from mom) and it might have black or brown on it. Dad gave him a Y which does not have color genes on it. This is what usually happens - you get a white male cat plus brown or black but both.

Enter the world of the Klinefelter cat. These are male kitties with all 3 colors. It's not a magic trick, just a genetics oopsie daisy. What happened is Klinefelter male cats have 3 gender chromosomes: two X's and one Y. He's a white cat who received brown on one of his X's and black on the other X. This is rare but does happen every once in awhile.

Klinefelter male cats are rarely able to become fathers themselves. I'll spare you the details and just say that their hormones and manliness are affected. Klinefelter's Syndrome has side effects beyond just coloring. It exists throughout the animal kingdom, even in humans.

I hope you enjoyed this information and that I didn't cause you any brain damage with the mini genetics lesson.

Well done Liz. You should be writing books instead of entertaining the masses. Your writing style is very engaging.
Hope I don't sound biased.