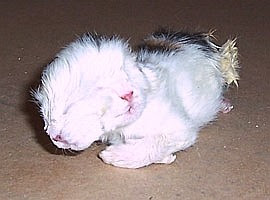 The Rawson family's cat had two kittens. One was "normal" and the other had two faces. The double-faced kitty had passed away before being discovered. Rather than bury it, the Rawsons have decided to donate it to science, to teach students about DNA.

This is not the mother cat's first litter. The Rawsons have wisely decided to get her spayed.

Here's a video of the news broadcast:

Strange..
BTW i wanna have a closer look of that kitten.