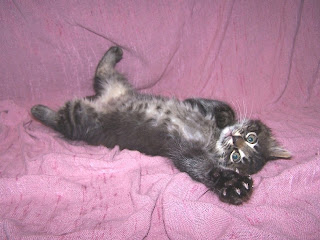 This is the story of my little boy. But he's not so little anymore and after the appointment with Mr. Snippy, he isn't a boy anymore either.
I was in the backyard one autumn, talking to my next door neighbor. She told me that she heard meowing all night long and asked if I had heard anything. Honestly, as soon as I told her I hadn't heard anything, the meowing began - and it came from underneath a mum bush that was right next to us!
I reached into the bush and pulled out a tiny kitten, hissing. It reminded me of the little tough-guy sidekick in "Gay Purree," a cartoon about cats starring the voice of Judy Garland. Then my new-found kitty started meowing, no - screaming, as loud as he could. His tiny, high-pitched voice echoed through the whole neighborhood. He was the cutest, most pathetic looking thing I'd ever seen!
At that point in time, I already owned 3 cats, 2 of which were sisters adopted just a few months before. I also volunteered with an animal rescue called Pet Guardian, specializing in fundraising. Time to put on my super-hero cape and get into action!
I brought the little fella into my house and checked him out. He was so darn bony - I could feel every bone in his body, every bump on his backbone, his pelvis, everything. He was also very tiny. He fit in the palm of one hand. This kitty was way too young to be away from it's mommy or given away to a new home. I decided that he was probably a feral kitten and, for unknown reasons, got separated or abandoned by his mom and siblings. Maybe something happened that I didn't really want to know about!
I called Mary at Pet Guardian and she told me to take the little kitten to my own vet and she'd reimburse my cost. I will be the foster parent. Once he's old enough and healthy again, we can put him up on Pet Guardian's website and adopt him out.
I set out some of my own cat's kibble and water and the little kitty went right for it. What's so funny is that he made loud yum-yum-yum sounds when he ate! It was hysterical!
I held my little charge in my arms, wrapped in a snuggly towel, for the rest of the day. My own cats jumped up and smelled him now and then. He was very interested in them but I wanted to keep them apart because he was so frail.
When my daughter arrived home from school, she fell in love with him. She'd never seen such a tiny kitten before and decided we should name it something that means "small." We ended up with "Pee Wee."
That night I had to take my daughter to a school event, so I made Pee Wee a little bedroom in the downstairs bathroom with the door closed and a note on that read, "There's a kitten in here. Don't worry-we're not keeping it" for my hubby who already thinks we live in a zoo.
That night I put Pee Wee up in a box to sleep in. It had an 8" square aluminum pan with litter at one end and towels and beanie baby "siblings" at the other end to sleep with. I placed the box on the floor, right next to my side of the bed. What a night - it brought me back to when my own daughter was a newborn. Pee Wee would wake up every 2 or 3 hours and make these pitiful little mews. I'd pick him up and snuggle him and then set him next to some food and water which he'd eat, again making his cute yum-yum-yum sounds. Next I'd put him on his litter box to do his business, then wipe his behind with a babywipe (made for pets) and then put him in bed with me, next to my chest so he could hear my heart beat. Once he seemed passed out, I'd transfer him to his little box again.
I didn't get much sleep that week. Pee Wee had the same schedule as a newborn. Also - he had diareah. I'd be drifting off to sleep and alot of a sudden...kitten farts! I got the giggles so bad! Only a mommy would find this cute!
The next morning I took Pee Wee to the vet who estimated his age at 4 weeks. I told him Pee Wee was walking funny on one leg, perhaps because he's a toddler and/or he's weak from malnourishment. The vet said both were good reasons but it ended up Pee Wee had a broken leg - not just a little crack, but almost broken into 2 pieces! The vet said his bones were too tiny and very brittle (because of malnutrition) and to touch them - they'd just break more. My eyes welled up with tears. He'd need "cage rest" for a month. 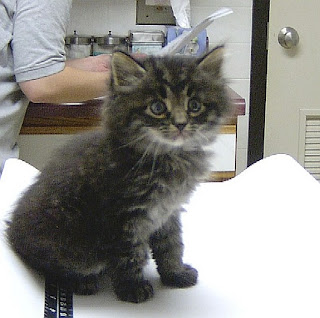 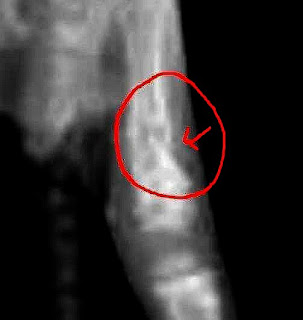 Pee Wee was also flea infested and would need baths in Dawn. He was too young for commercial/chemical flea treatments.
Cage rest? How on earth do you tell a little kitten to lay down and not to play or jump or frolick?!!! Even when alone in the bathroom, he attacked the print on the wallpaper!
So little Pee Wee came home and got his first bath in the kitchen sink. I ended up giving my other 3 cats (Ashley, Blue and Pepper) baths, too, just incase they got some hitchhikers. Poor Pee Wee got weekly baths for a month, just to make sure I got all the fleas. I also sprayed the carpets, sofa and curtains and washed all my bedding.
Back to the issue of "cage rest." I felt this little guy needed socializing and to keep him away from other cats for a whole month would be detrimental. It also broke my heart. I decided to bring him out of his bathroom world every hour for about 10 minutes. I held him mostly and let everyone sniff each other. He was so fascinated with the other cats! I'd let him walk a little, but running was a no-no.
Pee Wee's first shots were delayed a few weeks because of his ill health. When he was finally ready, Pet Guardian put him up on their website, noting him as a special needs kitty because of his leg. No takers! Usually kittens get instant responses and go fast. Mary thinks it's because people were scared off by the possiblity of high vet expenses in the future.
Well, after a month of loving little Pee Wee, I fell in love with him. I called Mary and asked if I could keep him. I sent her the adoption fee to help reimbuse the money she'd already spent on him, even though she said I could have him for free.
Pee Wee is now 2.5 years old. His leg healed completely but it's crooked a little. This hasn't hindered him a bit - he can jump onto the kitchen counters just fine. His favorite place to nap is the bathroom sink!
He still has a very strong survival instinct. It all started with his loud screams for help, rather than lying down and giving up.
Nowadays, he "covers" his kibble by pawing at the floor after he eats. He also does this right after I fill the bowl, even if he doesn't eat, wanting to save some for later. If the bowl starts looking a little empty, he'll tell me even if he's not hungry, to refill the bowl. His favorite way to get my attention is to wiggle the toilet handle until I get up and refill the bowl. I can get up, give him attention or whatever, and he'll start right back up with that noisy handle if I've failed to fill the kibble bowl.
Oh, I should have knocked on wood when we named Pee Wee. He's now about 2 inches taller and longer than my other cats and now weighs 17 pounds. The vet calls him, "Moose!"
He's my little boy and I love him! 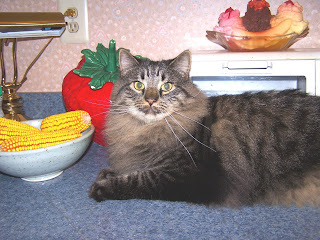 Oh my, he is gorgeous! And what a nice story. You are an angel. Purrs from all of us!

What a cutie and a great story.

Awww, it sounds like Pee Wee went through so much, but he found a wonderful home in the end. And he is very handsome!

qute this cat was when little, as all kitten, anyway the most important is that you save him and finally could feel part of a family!
ciao